Context. Sub-millimetre observations suggest that the filaments of interstellar clouds have rather uniform widths and can be described with the so-called Plummer profiles. The shapes of the filament profiles are believed to be closely linked to the formation mechanism and physical state of the filaments.
Aims: Before drawing conclusions about the observed column-density profiles, we must evaluate the observational uncertainties. We estimate the bias that could result from radiative transfer effects and from the variations in submm dust emissivity that are expected to take place in dense clouds.
Methods: We use cloud models obtained with magnetohydrodynamic simulations and carry out radiative transfer calculations to produce maps of sub-millimetre surface brightness. Column densities are estimated based on the synthetic observations. For selected filaments, the estimated profiles are compared to those derived from the original column density. The possible effects of spatial variations in the dust properties are examined.
Results: With instrumental noise typical of the Herschel observations, the parameters derived for nearby clouds are correct to within a few percent. The radiative transfer effects have only a minor effect on the results. If the signal-to-noise ratio is degraded by a factor of four, the errors become significant, and for half of the examined filaments the values remain practically unconstrained. The errors also increase in proportion to the cloud distance. Assuming the resolution of Herschel instruments, the model filaments are barely resolved at a distance of ~ 400 pc and the errors in the parameters of the Plummer function are several tens of percent.
Conclusions: The Plummer parameters, in particular the power-law exponent p, are sensitive to noise but can be determined with good accuracy using Herschel data. However, one must be cautious about possible line-of-sight confusion. In our model cloud, a large fraction of the filaments identified from column density maps are discontinuous structures in three dimensions. 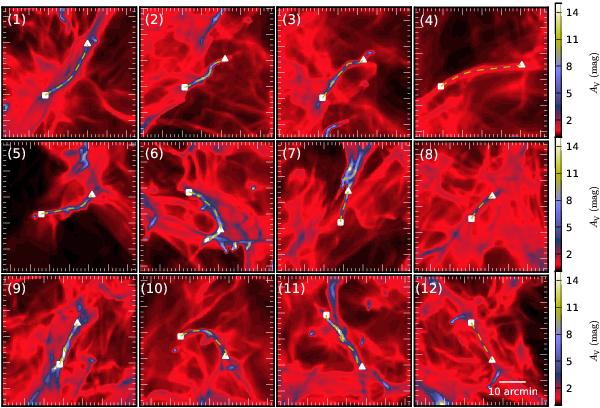