Context. The high frequency peaked BL Lac PKS 2155-304 with a redshift of z = 0.116 was discovered in 1997 in the very high energy (VHE, E > 100 GeV) γ-ray range by the University of Durham Mark VI γ-ray Cherenkov telescope in Australia with a flux corresponding to 20% of the Crab Nebula flux. It was later observed and detected with high significance by the southern Cherenkov observatory H.E.S.S. establishing this source as the best studied southern TeV blazar. Detection from the northern hemisphere is difficult due to challenging observation conditions under large zenith angles. In July 2006, the H.E.S.S. collaboration reported an extraordinary outburst of VHE γ-emission. During the outburst, the VHE γ-ray emission was found to be variable on the time scales of minutes and with a mean flux of ~7 times the flux observed from the Crab Nebula. Follow-up observations with the MAGIC-I standalone Cherenkov telescope were triggered by this extraordinary outburst and PKS 2155-304 was observed between 28 July to 2 August 2006 for 15 h at large zenith angles.
Aims: We studied the behavior of the source after its extraordinary flare. Furthermore, we developed an analysis method in order to analyze these data taken under large zenith angles.
Methods: Here we present an enhanced analysis method for data taken at high zenith angles. We developed improved methods for event selection that led to a better background suppression.
Results: The quality of the results presented here is superior to the results presented previously for this data set: detection of the source on a higher significance level and a lower analysis threshold. The averaged energy spectrum we derived has a spectral index of (-3.5 ± 0.2) above 400 GeV, which is in good agreement with the spectral shape measured by H.E.S.S. during the major flare on MJD 53 944. Furthermore, we present the spectral energy distribution modeling of PKS 2155-304. With our observations we increased the duty cycle of the source extending the light curve derived by H.E.S.S. after the outburst. Finally, we find night-by-night variability with a maximal amplitude of a factor three to four and an intranight variability in one of the nights (MJD 53 945) with a similar amplitude. 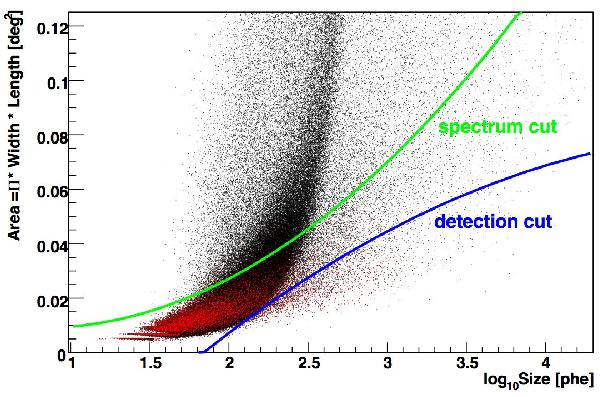