We present optical (B, V, Rc, Ic and y) and near-infrared (J, H, and Ks) photometric and spectroscopic observations of a classical nova for five years from 2007 to 2011. Our photometric observations show a declining event in optical bands shortly after the maximum light, which took about 250 days to recover. This event was most probably caused by dust formation. The event was accompanied by a short (~30 days) re-brightening episode (~2.5 mag in V), which suggests that there had been some re-ignition of the surface nuclear burning. After 2008, the y band observations show a very long plateau at around y = 10.5 for more than 1000 days until April 2011 (~1500 days after the maximum light). The nova had taken a very long time (~50 months) to enter the nebular phase, according to a clear detection of both [O iii] 4959 and 5007 and is still continuing to generate the wind caused by H-burning. This finding suggests that historically is evolving at its slowest ever measured rate. The interval from the maximum light (2007 February 16) to the beginning of the nebular phase is longer than any previously known slow novae: (18 months), (10 months), or (8 months). It suggests that the mass of a white dwarf in the system might be 0.6 M⊙ or lower. The distance, based on our measurements of the expansion velocity combined with the directly measured size of the dust shell, is estimated to be 1.1 ± 0.5 kpc. 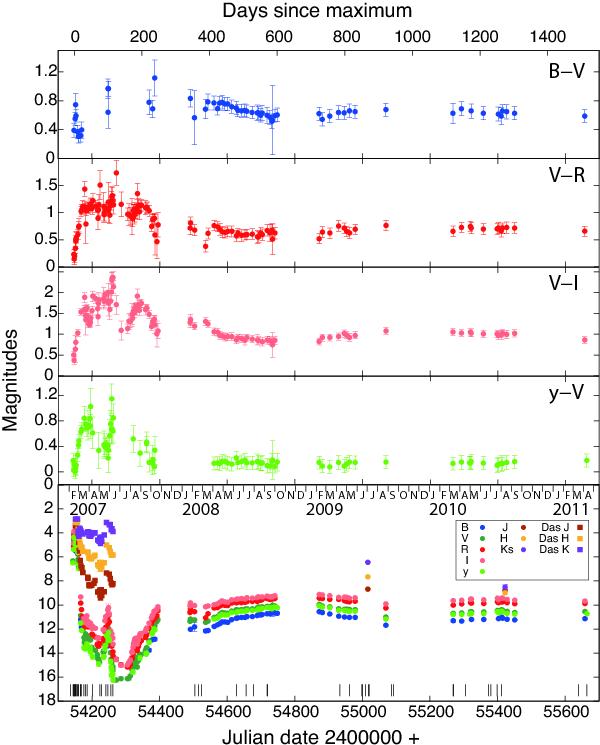