Wavelet analysis of baryon acoustic structures in the galaxy distribution

Context. Baryon acoustic oscillations (BAO) are imprinted in the density field by acoustic waves travelling in the plasma of the early universe. Their fixed scale can be used as a standard ruler to study the geometry of the universe.
Aims: The BAO have been previously detected using correlation functions and power spectra of the galaxy distribution. We present a new method to detect the real-space structures associated with BAO. These baryon acoustic structures are spherical shells of relatively small density contrast, surrounding high density central regions.
Methods: We design a specific wavelet adapted to search for shells, and exploit the physics of the process by making use of two different mass tracers, introducing a specific statistic to detect the BAO features. We show the effect of the BAO signal in this new statistic when applied to the Λ - cold dark matter (ΛCDM) model, using an analytical approximation to the transfer function. We confirm the reliability and stability of our method by using cosmological N-body simulations from the MareNostrum Institut de Ciències de l'Espai (MICE).
Results: We apply our method to the detection of BAO in a galaxy sample drawn from the Sloan Digital Sky Survey (SDSS). We use the "main" catalogue to trace the shells, and the luminous red galaxies (LRG) as tracers of the high density central regions. Using this new method, we detect, with a high significance, that the LRG in our sample are preferentially located close to the centres of shell-like structures in the density field, with characteristics similar to those expected from BAO. We show that stacking selected shells, we can find their characteristic density profile.
Conclusions: We delineate a new feature of the cosmic web, the BAO shells. As these are real spatial structures, the BAO phenomenon can be studied in detail by examining those shells. 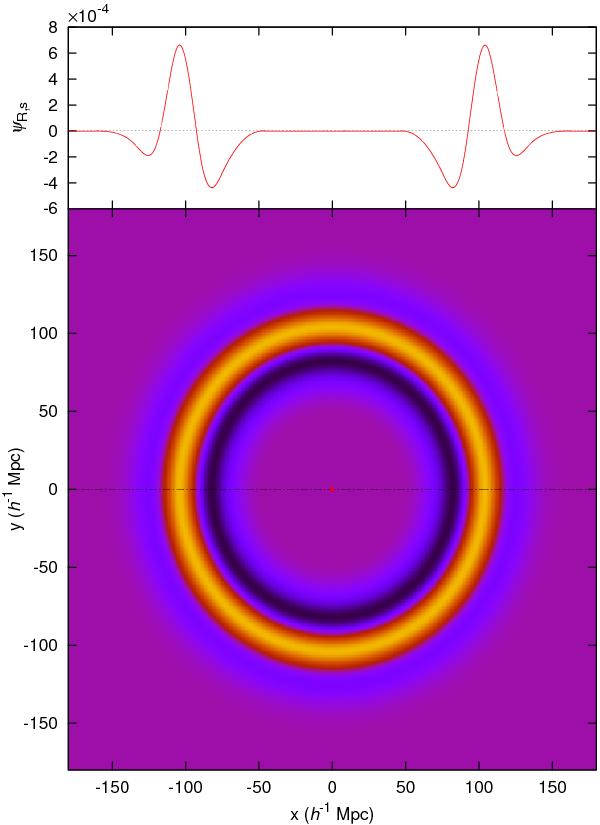