Kinematics and helicity evolution of a loop-like eruptive prominence


Aims: We aim at investigating the morphology as well as kinematic and helicity evolution of a loop-like prominence during its eruption.
Methods: We used multi-instrument observations from AIA/SDO, EUVI/STEREO and LASCO/SoHO. The kinematic, morphological, geometrical, and helicity evolution of a loop-like eruptive prominence were studied in the context of the magnetic flux rope model of solar prominences.
Results: The prominence eruption evolved as a height-expanding twisted loop with both legs anchored in the chromosphere of a plage area. The eruption process consisted of a prominence activation, acceleration, and a phase of constant velocity. The prominence body was composed of counter-clockwise twisted threads around the main prominence axis. The twist during the eruption was estimated at 6π (3 turns). The prominence reached a maximum height of 526 Mm before contracting to its primary location and was partially reformed in the same place two days after the eruption. This ejection, however, triggered a coronal mass ejection (CME) observed in LASCO C2. The prominence was located in the northern periphery of the CME magnetic field configuration and, therefore, the background magnetic field was asymmetric with respect to the filament position. The physical conditions of the falling plasma blobs were analysed with respect to the prominence kinematics.
Conclusions: The same sign of the prominence body twist and writhe, as well as the amount of twisting above the critical value of 2π after the activation phase indicate that possibly conditions for kink instability were present. No signature of magnetic reconnection was observed anywhere in the prominence body and its surroundings. The filament/prominence descent following the eruption and its partial reformation at the same place two days later suggest a confined type of eruption. The asymmetric background magnetic field possibly played an important role in the failed eruption.

Movies showing the temporal evolution are available in electronic form at http://www.aanda.org 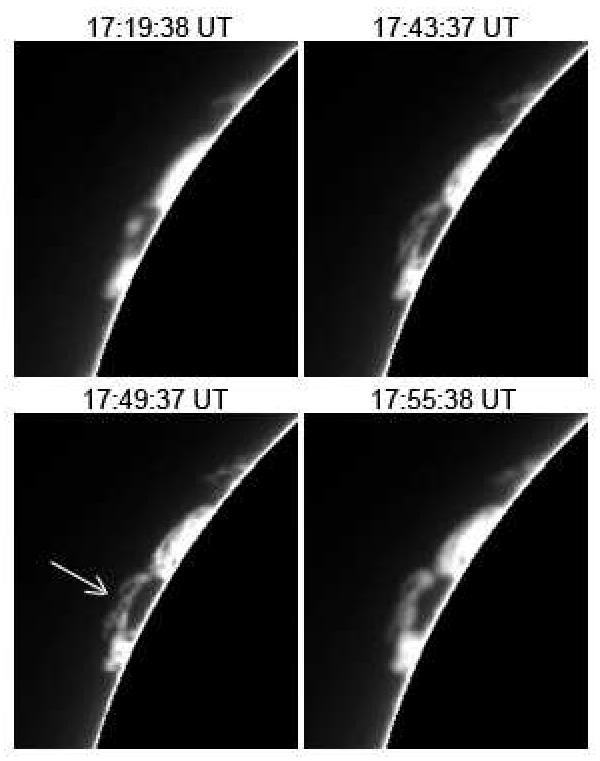