Context. The disk atmosphere is one of the fundamental elements of theoretical models of a protoplanetary disk. However, the direct observation of the warm gas (≫100 K) at large radius of a disk (≫10 AU) is challenging, because the line emission from warm gas in a disk is usually dominated by the emission from an inner disk.
Aims: Our goal is to detect the warm gas in the disk atmosphere well beyond 10 AU from a central star in a nearby disk system of the Herbig Be star HD 100546.
Methods: We measured the excitation temperature of the vibrational transition of CO at incremental radii of the disk from the central star up to 50 AU, using an adaptive optics system combined with the high-resolution infrared spectrograph CRIRES at the VLT.
Results: The observation successfully resolved the line emission with 0.″1 angular resolution, which is 10 AU at the distance of HD 100546. Population diagrams were constructed at each location of the disk, and compared with the models calculated taking into account the optical depth effect in LTE condition. The excitation temperature of CO is 400-500 K or higher at 50 AU away from the star, where the blackbody temperature in equilibrium with the stellar radiation drops as low as 90 K. This is unambiguous evidence of a warm disk atmosphere far away from the central star.

Based on data collected in the course of CRIRES program [084.C-0605] at the VLT on Cerro Paranal (Chile), which is operated by the European Southern Observatory (ESO). 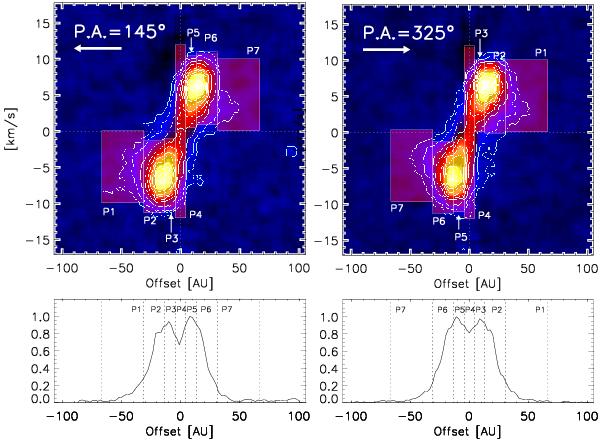