We present recent polarimetric images of the highly variable star R CrB using ExPo and archival WFPC2 images from the HST. We observed R CrB during its current dramatic minimum where it decreased more than 9 mag due to the formation of an obscuring dust cloud. Since the dust cloud is only in the line-of-sight, it mimics a coronograph allowing the imaging of the star's circumstellar environment. Our polarimetric observations surprisingly show another scattering dust cloud at approximately 1.3'' or 2000 AU from the star. We find that to obtain a decrease in the stellar light of 9 mag and with 30% of the light being reemitted at infrared wavelengths (from R CrB's SED) the grains in R CrB's circumstellar environment must have a very low albedo of approximately 0.07%. We show that the properties of the dust clouds formed around R CrB are best fitted using a combination of two distinct populations of grains size. The first are the extremely small 5 nm grains, formed in the low density continuous wind, and the second population of large grains (~0.14 μm) which are found in the ejected dust clouds. The observed scattering cloud, not only contains such large grains, but is exceptionally massive compared to the average cloud.

Based on observations made with the William Herschel Telescope operated on the island of La Palma by the Isaac Newton Group in the Spanish Observatorio del Roque de los Muchachos of the Instituto de Astrofisica de Canarias. 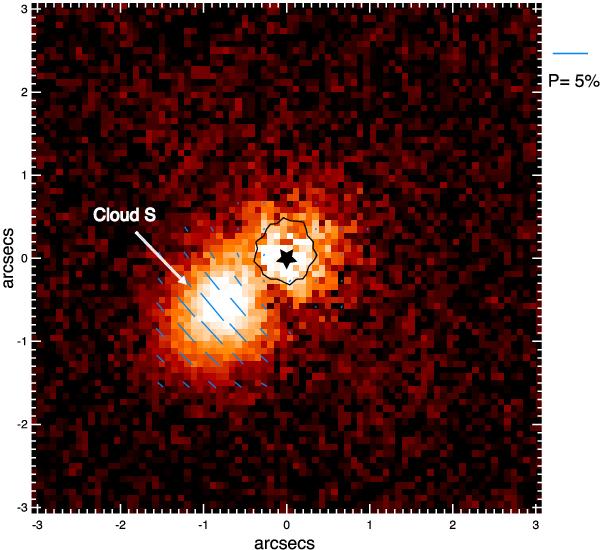