COSMOGRAIL: the COSmological MOnitoring of GRAvItational Lenses. X. Modeling based on high-precision astrometry of a sample of 25 lensed quasars: consequences for ellipticity, shear, and astrometric anomalies

Gravitationally lensed quasars can be used as powerful cosmological and astrophysical probes. We can (i) infer the Hubble constant H0 based on the so-called time-delay technique, (ii) unveil substructures along the line-of-sight toward distant galaxies, and (iii) compare the shape and the slope of baryons and dark matter distributions in the inner regions of galaxies. To reach these goals, we need high-accuracy astrometry of the quasar images relative to the lensing galaxy and morphology measurements of the lens. In this work, we first present new astrometry for 11 lenses with measured time delays, namely, JVAS B0218+357, SBS 0909+532, RX J0911.4+0551, FBQS J0951+2635, HE 1104-1805, PG 1115+080, JVAS B1422+231, SBS 1520+530, CLASS B1600+434, CLASS B1608+656, and HE 2149-2745. These measurements proceed from the use of the Magain-Courbin-Sohy (MCS) deconvolution algorithm applied in an iterative way (ISMCS) to near-IR HST images. We obtain a typical astrometric accuracy of about 1-2.5 mas and an accurate shape measurement of the lens galaxy. Second, we combined these measurements with those of 14 other lensing systems, mostly from the COSMOGRAIL set of targets, to present new mass models of these lenses. The modeling of these 25 gravitational lenses led to the following results: 1) in four double-image quasars (HE0047-1746, J1226-006, SBS 1520+530, and HE 2149-2745), we show that the influence of the lens environment on the time delay can easily be quantified and modeled, hence putting these lenses with high priority for time-delay determination; 2) for quadruple-image quasars, the difficulty often encountered in reproducing the image positions to milli-arcsec accuracy (astrometric anomaly problem) is overcome by explicitly including the nearest visible galaxy/satellite in the lens model. However, one anomalous system (RXS J1131-1231) does not show any luminous perturber in its vicinity, and three others (WFI 2026-4536, WFI 2033-4723, and B2045+265) have problematic modeling. These four systems are the best candidates for a pertubation by a dark matter substructure along the line-of-sight; 3) we revisit the correlation between the position angle (PA) and ellipticity of the light and of the mass distribution in lensing galaxies. As in previous studies, we find a significant correlation between the PA of the light and of the mass distributions. However, in contrast with these same studies, we find that the ellipticity of the light and of the mass also correlate well, suggesting that the overall spatial distribution of matter is not very different from the baryon distribution in the inner ~5 kpc of lensing galaxies. This offers a new test for high-resolution hydrodynamical simulations.

Based on observations made with the NASA/ESA HST Hubble Space Telescope by the CfA-Arizona Space Telescope Lens Survey (CASTLeS) collaboration, obtained from the data archive at the Space Science Institute, which is operated by AURA, the Association of Universities for Research in Astronomy, Inc., under NASA contract NAS-5-26555. 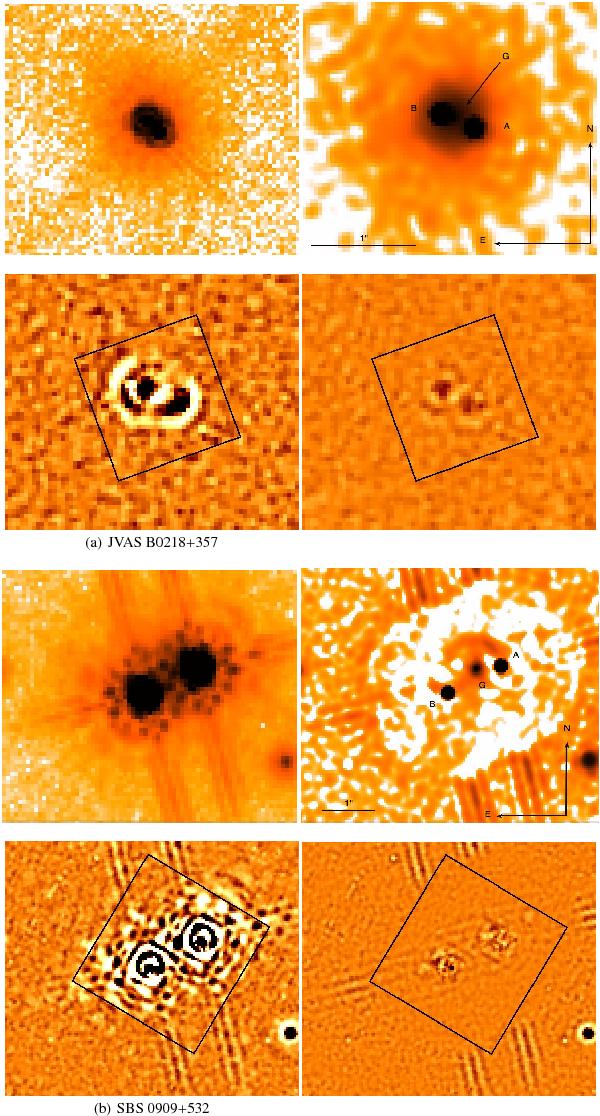