Rotational spectrum of a chiral amino acid precursor, 2-aminopropionitrile, and searches for it in Sagittarius B2(N)

Context. No chiral molecule has been detected in the interstellar medium (ISM) so far.
Aims: A good candidate for an interstellar detection is 2-aminopropionitrile (CH3CH(NH2)CN), a chiral molecule with a C3H6N2 formula. The first member of this series, aminoacetonitrile (H2NCH2CN), was recently detected, demonstrating that at least one aminonitrile exists in the ISM.
Methods: Experimental spectra of 2-aminopropionitrile have been recorded in the microwave and submm energy range (8-80 GHz, 150-660 GHz). Ab initio calculations facilitated the assignment of the ground state of the most stable conformer and its five lowest excited vibrational states. An unbiased spectral survey of the 80-116 GHz atmospheric window performed with the IRAM 30 m telescope was used to search for this molecule in the hot core Sgr B2(N). This survey was analyzed in the local thermodynamical equilibrium (LTE) approximation. The emission of 2-aminopropionitrile was modeled simultaneously with the emission of all molecules known in Sgr B2(N), which allowed us to properly take into account line blending and avoid misassignments.
Results: More than 4000 lines of the ground state and the five lowest excited vibrational states (from 185 to 375 cm-1) were assigned in the experimental spectrum. The partition function including the vibrational contribution of these states was calculated. Only ten groups of transitions of 2-aminopropionitrile are not severely affected by line blending in the Sgr B2(N) spectrum. Six of them could be considered as tentatively detected but the LTE predictions of the four remaining groups are not (or only marginally) consistent with the observed spectrum. Therefore, only an upper limit of 1.7 × 1016 cm-2 can be securely derived for the column density of 2-aminopropionitrile toward Sgr B2(N), assuming the same source size, temperature, linewidth, and systemic velocity as for aminoacetonitrile
Conclusions: 2-aminopropionitrile is at least 1.8 times less abundant than aminoacetonitrile. A simple comparison to the pair methyl cyanide (CH3CN)/ethyl cyanide (CH3CH2CN) detected toward Sgr B2(N) suggests that 2-aminopropionitrile should be 3.5 times less abundant than aminoacetonitrile, which is consistent with the limit derived here. 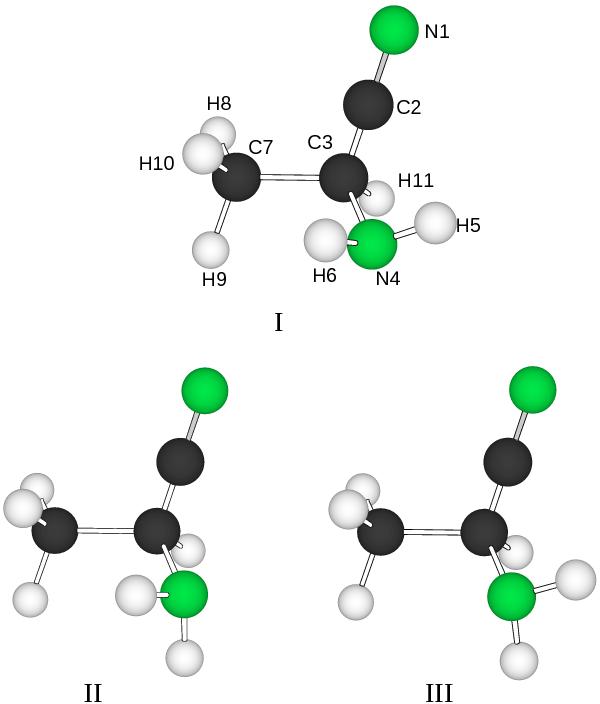