Context. Strong-lensing has developed into an important astrophysical tool for probing cosmology and galaxies (their structures, formations, and evolutions). Now several hundreds of strong-lens systems produced by massive galaxies have been discovered, which may form well-defined samples useful for statistical analyses.
Aims: We aim to collect relatively complete lens-redshift data from various large systematic surveys of gravitationally lensed quasars and check the possibility of using these as a future supplement to other cosmological probes.
Methods: We use the distribution of gravitationally-lensed image separations observed in the Cosmic Lens All-Sky Survey (CLASS), the PMN-NVSS Extragalactic Lens Survey (PANELS), the Sloan Digital Sky Survey (SDSS) and other surveys, considering a singular isothermal ellipsoid (SIE) model for galactic potentials as well as improved new measurements of the velocity dispersion function of galaxies based on the SDSS DR5 data and recent semi-analytical modeling of galaxy formation to constrain two dark-energy models (ΛCDM and constant w) under a flat universe assumption.
Results: We find that the current lens-redshift data yield a relatively weak constraint on the model parameter ΩΛ = 0.85-0.18+0.11 for the simplest cosmological constant model. However, by combing the redshift data with the cosmic macrowave background data, we obtain ΩΛ = 0.78-0.03+0.02; by combing the redshift data with the baryonic acoustic oscillation peak and the comic macrowave background data, we obtain a more stringent result: ΩΛ = 0.75-0.02+0.02. We obtain w < -0.52 at 68.3% CL with the lens-redshift data for the constant w of a dynamical dark-energy model, therefore, the current quintessence dark-energy model is still included at 1σ and a super-negative equation of state is not necessarily favored by this strong lensing data. We notice that the joint data can also provide a good fit with Ωx = 0.80-0.17+0.17, w = -1.12-1.88+0.57 and Ωx = 0.71-0.07+0.07, w = -0.78-0.34+0.22, respectively, which agree with the flat Λ CDM model at 1σ. 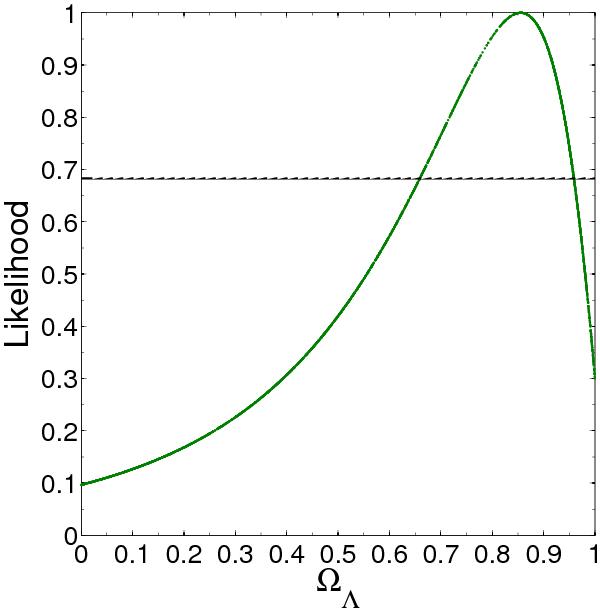