An H I Survey of Six Local Group Analogs. II. H I Properties of Group Galaxies

We have conducted an H I 21 cm emission-line survey of six loose groups of galaxies chosen to be analogs to the Local Group. The survey was conducted using the Parkes multibeam instrument and the Australia Telescope Compact Array (ATCA) over a ~1 Mpc2 area and covering the full depth of each group, with an M H I sensitivity of ~7 × 105 M ⊙. Our survey detected 110 sources, 61 of which are associated with the six groups. All of these sources were confirmed with ATCA observations or were previously cataloged by HIPASS. The sources all have optical counterparts and properties consistent with dwarf irregular or late-type spiral galaxies. We present here the H I properties of the groups and their galaxies. We derive an H I mass function (HIMF) for the groups that is consistent with being flatter than the equivalent field HIMF. We also derive a circular velocity distribution function, tracing the luminous dark matter halos in the groups, that is consistent with those of the Local Group and HIPASS galaxies, both of which are shallower than that of clusters or predictions from cold dark matter models of galaxy formation. 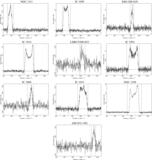