The friends-of-friends algorithm (hereafter FOF) is a percolation algorithm which is routinely used to identify dark matter halos from N-body simulations. We use results from percolation theory to show that the boundary of FOF halos does not correspond to a single density threshold but to a range of densities close to a critical value that depends upon the linking length parameter, b. We show that for the commonly used choice of b = 0.2, this critical density is equal to 81.62 times the mean matter density. Consequently, halos identified by the FOF algorithm enclose an average overdensity which depends on their density profile (concentration) and therefore changes with halo mass, contrary to the popular belief that the average overdensity is ~180. We derive an analytical expression for the overdensity as a function of the linking length parameter b and the concentration of the halo. Results of tests carried out using simulated and actual FOF halos identified in cosmological simulations show excellent agreement with our analytical prediction. We also find that the mass of the halo that the FOF algorithm selects crucially depends upon mass resolution. We find a percolation-theory-motivated formula that is able to accurately correct for the dependence on number of particles for the mock realizations of spherical and triaxial Navarro-Frenk-White halos. However, we show that this correction breaks down when applied to the real cosmological FOF halos due to the presence of substructures. Given that abundance of substructure depends on redshift and cosmology, we expect that the resolution effects due to substructure on the FOF mass and halo mass function will also depend on redshift and cosmology and will be difficult to correct for in general. Finally, we discuss the implications of our results for the universality of the mass function. 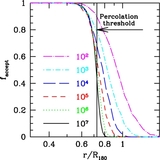