We present observations of ~7 deg2 of the North American and Pelican Nebulae region at 24, 70, and 160 μm with the Spitzer Space Telescope Multiband Imaging Photometer for Spitzer (MIPS). We incorporate the MIPS observations with earlier Spitzer Infrared Array Camera (IRAC) observations, as well as archival near-infrared (IR) and optical data. We use the MIPS data to identify 1286 young stellar object (YSO) candidates. IRAC data alone can identify 806 more YSO candidates, for a total of 2076 YSO candidates. Prior to the Spitzer observations, there were only ~200 YSOs known in this region. Three subregions within the complex are highlighted as clusters: the Gulf of Mexico, the Pelican, and the Pelican's Hat. The Gulf of Mexico cluster is subject to the highest extinction (AV at least ~30) and has the widest range of infrared colors of the three clusters, including the largest excesses and by far the most point-source detections at 70 μm. Just 3% of the cluster members were previously identified; we have redefined this cluster as about 10-100 times larger (in projected area) than was previously realized. 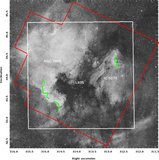