The Galactic O-Star Spectroscopic Survey. I. Classification System and Bright Northern Stars in the Blue-violet at R ~ 2500

We present the first installment of a massive spectroscopic survey of Galactic O stars, based on new, high signal-to-noise ratio, R ~ 2500 digital observations from both hemispheres selected from the Galactic O-Star Catalog of Maíz Apellániz et al. and Sota et al. The spectral classification system is rediscussed and a new atlas is presented, which supersedes previous versions. Extensive sequences of exceptional objects are given, including types Ofc, ON/OC, Onfp, Of?p, Oe, and double-lined spectroscopic binaries. The remaining normal spectra bring this first sample to 184 stars, which is close to complete to B = 8 and north of δ = -20° and includes all of the northern objects in Maíz Apellániz et al. that are still classified as O stars. The systematic and random accuracies of these classifications are substantially higher than previously attainable, because of the quality, quantity, and homogeneity of the data and analysis procedures. These results will enhance subsequent investigations in Galactic astronomy and stellar astrophysics. In the future, we will publish the rest of the survey, beginning with a second paper that will include most of the southern stars in Maíz Apellániz et al. 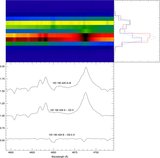