A simple six-parameter ΛCDM model provides a successful fit to WMAP data. This holds both when the WMAP data are analyzed alone or in combination with other cosmological data. Even so, it is appropriate to examine the data carefully to search for hints of deviations from the now standard model of cosmology, which includes inflation, dark energy, dark matter, baryons, and neutrinos. The cosmological community has subjected the WMAP data to extensive and varied analyses. While there is widespread agreement as to the overall success of the six-parameter ΛCDM model, various "anomalies" have been reported relative to that model. In this paper we examine potential anomalies and present analyses and assessments of their significance. In most cases we find that claimed anomalies depend on posterior selection of some aspect or subset of the data. Compared with sky simulations based on the best-fit model, one can select for low probability features of the WMAP data. Low probability features are expected, but it is not usually straightforward to determine whether any particular low probability feature is the result of the a posteriori selection or non-standard cosmology. Hypothesis testing could, of course, always reveal an alternative model that is statistically favored, but there is currently no model that is more compelling. We find that two cold spots in the map are statistically consistent with random cosmic microwave background (CMB) fluctuations. We also find that the amplitude of the quadrupole is well within the expected 95% confidence range and therefore is not anomalously low. We find no significant anomaly with a lack of large angular scale CMB power for the best-fit ΛCDM model. We examine in detail the properties of the power spectrum data with respect to the ΛCDM model and find no significant anomalies. The quadrupole and octupole components of the CMB sky are remarkably aligned, but we find that this is not due to any single map feature; it results from the statistical combination of the full-sky anisotropy fluctuations. It may be due, in part, to chance alignments between the primary and secondary anisotropy, but this only shifts the coincidence from within the last scattering surface to between it and the local matter density distribution. While this alignment appears to be remarkable, there was no model that predicted it, nor has there been a model that provides a compelling retrodiction. We examine claims of a hemispherical or dipole power asymmetry across the sky and find that the evidence for these claims is not statistically significant. We confirm the claim of a strong quadrupolar power asymmetry effect, but there is considerable evidence that the effect is not cosmological. The likely explanation is an insufficient handling of beam asymmetries. We conclude that there is no compelling evidence for deviations from the ΛCDM model, which is generally an acceptable statistical fit to WMAP and other cosmological data.

WMAP is the result of a partnership between Princeton University and NASA's Goddard Space Flight Center. Scientific guidance is provided by the WMAP Science Team. 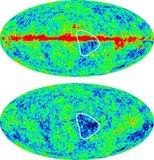