Young stars typically have strong magnetic fields, so that the magnetospheres of newly formed close binaries can interact, dissipate energy, and produce synchrotron radiation. The V773 Tau A binary system, a pair of T Tauri stars with a 51 day orbit, displays such a signature, with peak emission taking place near periastron. This paper proposes that the observed emission arises from the change in energy stored in the composite magnetic field of the system. We model the fields using the leading order (dipole) components and show that this picture is consistent with current observations. In this model, the observed radiation accounts for a fraction of the available energy of interaction between the magnetic fields from the two stars. Assuming antisymmetry, we compute the interaction energy E int as a function of the stellar radii, the stellar magnetic field strengths, the binary semimajor axis, and orbital eccentricity, all of which can be measured independently of the synchrotron radiation. The variability in time and energetics of the synchrotron radiation depend on the details of the annihilation of magnetic fields through reconnection events, which generate electric fields that accelerate charged particles, and how those charged particles, especially fast electrons, are removed from the interaction region. However, the major qualitative features are well described by the background changes in the global magnetic configuration driven by the orbital motion. The theory can be tested by observing a collection of pre-main-sequence binary systems. 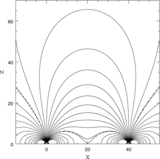