With the NEOWISE portion of the Wide-field Infrared Survey Explorer (WISE) project, we have carried out a highly uniform survey of the near-Earth object (NEO) population at thermal infrared wavelengths ranging from 3 to 22 μm, allowing us to refine estimates of their numbers, sizes, and albedos. The NEOWISE survey detected NEOs the same way whether they were previously known or not, subject to the availability of ground-based follow-up observations, resulting in the discovery of more than 130 new NEOs. The survey's uniform sensitivity, observing cadence, and image quality have permitted extrapolation of the 428 near-Earth asteroids (NEAs) detected by NEOWISE during the fully cryogenic portion of the WISE mission to the larger population. We find that there are 981 ± 19 NEAs larger than 1 km and 20,500 ± 3000 NEAs larger than 100 m. We show that the Spaceguard goal of detecting 90% of all 1 km NEAs has been met, and that the cumulative size distribution is best represented by a broken power law with a slope of 1.32 ± 0.14 below 1.5 km. This power-law slope produces ~13, 200 ± 1900 NEAs with D > 140 m. Although previous studies predict another break in the cumulative size distribution below D ~ 50-100 m, resulting in an increase in the number of NEOs in this size range and smaller, we did not detect enough objects to comment on this increase. The overall number for the NEA population between 100 and 1000 m is lower than previous estimates. The numbers of near-Earth comets and potentially hazardous NEOs will be the subject of future work. 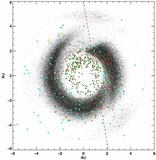