We present the AGILE gamma-ray observations in the energy range 50 MeV-10 GeV of the supernova remnant (SNR) W44, one of the most interesting systems for studying cosmic-ray production. W44 is an intermediate-age SNR (~20, 000 years) and its ejecta expand in a dense medium as shown by a prominent radio shell, nearby molecular clouds, and bright [S II] emitting regions. We extend our gamma-ray analysis to energies substantially lower than previous measurements which could not conclusively establish the nature of the radiation. We find that gamma-ray emission matches remarkably well both the position and shape of the inner SNR shocked plasma. Furthermore, the gamma-ray spectrum shows a prominent peak near 1 GeV with a clear decrement at energies below a few hundreds of MeV as expected from neutral pion decay. Here we demonstrate that (1) hadron-dominated models are consistent with all W44 multiwavelength constraints derived from radio, optical, X-ray, and gamma-ray observations; (2) ad hoc lepton-dominated models fail to explain simultaneously the well-constrained gamma-ray and radio spectra, and require a circumstellar density much larger than the value derived from observations; and (3) the hadron energy spectrum is well described by a power law (with index s = 3.0 ± 0.1) and a low-energy cut-off at Ec = 6 ± 1 GeV. Direct evidence for pion emission is then established in an SNR for the first time. 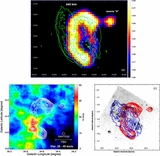