A pixel analysis is carried out on the interacting face-on spiral galaxy NGC 5194 (M51A), using the Hubble Space Telescope (HST)/Advanced Camera for Surveys (ACS) images in the F435W, F555W, and F814W (BVI) bands. After 4 × 4 binning of the HST/ACS images to secure a sufficient signal-to-noise ratio for each pixel, we derive several quantities describing the pixel color-magnitude diagram (pCMD) of NGC 5194: blue/red color cut, red pixel sequence parameters, blue pixel sequence parameters, and blue-to-red pixel ratio. The red sequence pixels are mostly older than 1 Gyr, while the blue sequence pixels are mostly younger than 1 Gyr, in their luminosity-weighted mean stellar ages. The color variation in the red pixel sequence from V = 20 mag arcsec-2 to V = 17 mag arcsec-2 corresponds to a metallicity variation of ∆[Fe/H] ~2 or an optical depth variation of ∆τ V ~ 4 by dust, but the actual sequence is thought to originate from the combination of those two effects. At V < 20 mag arcsec-2, the color variation in the blue pixel sequence corresponds to an age variation from 5 Myr to 300 Myr under the assumption of solar metallicity and τ V = 1. To investigate the spatial distributions of stellar populations, we divide pixel stellar populations using the pixel color-color diagram and population synthesis models. As a result, we find that the pixel population distributions across the spiral arms agree with a compressing process by spiral density waves: dense dust → newly formed stars. The tidal interaction between NGC 5194 and NGC 5195 appears to enhance the star formation at the tidal bridge connecting the two galaxies. We find that the pixels corresponding to the central active galactic nucleus (AGN) area of NGC 5194 show a tight sequence at the bright-end of the pCMD, which are in the region of R ~ 100 pc and may be a photometric indicator of AGN properties. 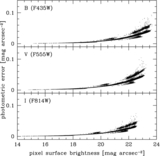