Is the Young Star Cluster NGC 376 Dissolving in the Field of the Small Magellanic Cloud?

We use deep images acquired with the Advanced Camera for Surveys (ACS) on board the Hubble Space Telescope in the filters F555W and F814W to characterize the properties of NGC 376, a young star cluster located in the wing of the Small Magellanic Cloud. Using isochrone fitting we derive for NGC 376 an age of 28 ± 7 Myr, in good agreement with previous studies. The high spatial resolution ACS data allow us to determine the center of gravity of the cluster and to construct extended surface brightness and radial density profiles. Neither of these profiles can be fitted with a theoretical model, suggesting that the cluster is not in virial equilibrium. Considering the young age of the cluster, we speculate that the distortion of the radial profiles may be the result of the rapid gas dispersal that follows the initial phase of star formation (SF). The cluster shows clear evidence of dynamical mass segregation. From the properties of the radial profiles and the present-day mass function we conclude that NGC 376 appears to have already lost nearly 90% of its initial stellar mass, probably as a consequence of the sudden gas dispersal that follows the early phase of SF. 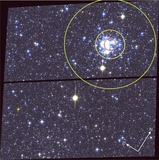