The ACS Nearby Galaxy Survey Treasury. VIII. The Global Star Formation Histories of 60 Dwarf Galaxies in the Local Volume

We present uniformly measured star formation histories (SFHs) of 60 nearby (D <~ 4 Mpc) dwarf galaxies based on color-magnitude diagrams of resolved stellar populations from images taken with the Hubble Space Telescope and analyzed as part of the ACS Nearby Galaxy Survey Treasury program (ANGST). This volume-limited sample contains 12 dwarf spheroidal (dSph)/dwarf elliptical (dE), 5 dwarf spiral, 28 dwarf irregular (dI), 12 dSph/dI (transition), and 3 tidal dwarf galaxies. The sample spans a range of ~10 mag in MB and covers a wide range of environments, from highly interacting to truly isolated. From the best-fit SFHs, we find three significant results for dwarf galaxies in the ANGST volume: (1) the majority of dwarf galaxies formed the bulk of their mass prior to z ~ 1, regardless of current morphological type; (2) the mean SFHs of dIs, transition dwarf galaxies (dTrans), and dSphs are similar over most of cosmic time, and only begin to diverge a few Gyr ago, with the clearest differences between the three appearing during the most recent 1 Gyr and (3) the SFHs are complex and the mean values are inconsistent with simple SFH models, e.g., single bursts, constant star formation rates (SFRs), or smooth, exponentially declining SFRs. The mean SFHs show clear divergence from the cosmic SFH at z <~ 0.7, which could be evidence that low-mass systems have experienced delayed star formation relative to more massive galaxies. The sample shows a strong density-morphology relationship, such that the dSphs in the sample are less isolated than the dIs. We find that the transition from a gas-rich to gas-poor galaxy cannot be solely due to internal mechanisms such as stellar feedback, and instead is likely the result of external mechanisms, e.g., ram pressure and tidal stripping and tidal forces. In terms of their environments, SFHs, and gas fractions, the majority of the dTrans appear to be low-mass dIs that simply lack Hα emission, similar to Local Group (LG) dTrans DDO 210. However, a handful of dTrans have remarkably low gas fractions, suggesting that they have nearly exhausted their gas supply, analogous to LG dTrans such as Phoenix. Finally, we have also included extensive exploration of uncertainties in the SFH recovery method, including the optimization of time resolution, the effects of photometric depth, and impact of systematic uncertainties due to the limitations in current stellar evolution models.

Based on observations made with the NASA/ESA Hubble Space Telescope, obtained from the Data Archive at the Space Telescope Science Institute, which is operated by the Association of Universities for Research in Astronomy, Inc., under NASA contract NAS 5-26555. 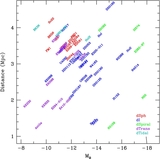