The Globular Cluster Population of NGC 7457: Clues to the Evolution of Field S0 Galaxies

In this paper, we present the results of a wide-field imaging study of the globular cluster (GC) system of the field S0 galaxy NGC 7457. To derive the global properties of the GC system, we obtained deep BVR images with the WIYN 3.5 m telescope and Minimosaic Imager and studied the GC population of NGC 7457 to a projected radius of ~30 kpc. Our ground-based data were combined with archival and published Hubble Space Telescope data to probe the properties of the GC system close to the galaxy center and reduce contamination in the GC candidate sample from foreground stars and background galaxies. We performed surface photometry of NGC 7457 and compared the galaxy's surface brightness profile with the surface density profile of the GC system. The profiles have similar shapes in the inner 1' (3.9 kpc), but the GC system profile appears to flatten relative to the galaxy light at larger radii. The GC system of NGC 7457 is noticeably elliptical in our images; we measure epsilon = 0.66 ± 0.14 for the GC distribution, which is consistent with our measured ellipticity of the galaxy light. We integrated the radial surface density profile of the GC system to derive a total number of GCs, N GC = 210 ± 30. The GC specific frequencies normalized by the galaxy luminosity and mass are SN = 3.1 ± 0.7 and T = 4.8 ± 1.1, respectively. Comparing the derived GC system properties and other empirical data for NGC 7457 to S0 formation scenarios suggests that this field S0 galaxy may have formed in an unequal-mass merger. 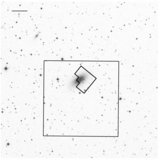