The Microlensing Properties of a Sample of 87 Lensed Quasars

Gravitational microlensing is a powerful tool for probing the physical properties of quasar accretion disks and properties of the lens galaxy such as its dark matter fraction and mean stellar mass. Unfortunately, the number of lensed quasars (~90) exceeds our monitoring capabilities. Thus, estimating their microlensing properties is important for identifying good microlensing candidates as well as for the expectations of future surveys. In this work, we estimate the microlensing properties of a sample of 87 lensed quasars. While the median Einstein radius crossing timescale is 20.6 years, the median source crossing timescale is 7.3 months. Broadly speaking, this means that on ~10 year timescales roughly half the lenses will be quiescent, with the source in a broad demagnified valley, and roughly half will be active with the source lying in the caustic ridges. We also found that the location of the lens system relative to the cosmic microwave background dipole has a modest effect on microlensing timescales, and in theory microlensing could be used to confirm the kinematic origin of the dipole. As a corollary of our study we analyzed the accretion rate parameters in a sub-sample of 32 lensed quasars. At fixed black hole mass, it is possible to sample a broad range of luminosities (i.e., Eddington factors) if it becomes feasible to monitor fainter lenses. 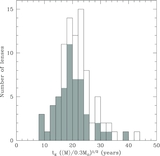