We use the 4 Ms Chandra Deep Field-South (CDF-S) survey to place direct constraints on the ubiquity of z ≈ 2 heavily obscured active galactic nuclei (AGNs) in K < 22 BzK-selected galaxies. Forty-seven (≈21%) of the 222 BzK-selected galaxies in the central region of the CDF-S are detected at X-ray energies, 11 (≈5%) of which have hard X-ray spectral slopes (Γ <~ 1), indicating the presence of heavily obscured AGN activity (N H >~ 3 × 1023 cm-2). The other 36 X-ray detected BzK galaxies appear to be relatively unobscured AGNs and starburst galaxies; we use X-ray variability analyses over a rest-frame baseline of ≈3 years to further confirm the presence of AGN activity in many of these systems. The majority (7 out of 11) of the heavily obscured AGNs have excess infrared emission over that expected from star formation (termed "infrared-excess galaxies"). However, we find that X-ray detected heavily obscured AGNs only comprise ≈25% of the infrared-excess galaxy population, which is otherwise composed of relatively unobscured AGNs and starburst galaxies. We find that the typical X-ray spectrum of the heavily obscured AGNs is better characterized by a pure reflection model than an absorbed power-law model, suggesting extreme Compton-thick absorption (N H >~ 1024 cm-2) in some systems. We verify this result by producing a composite rest-frame 2-20 keV spectrum, which has a similar shape as a reflection-dominated X-ray spectrum and reveals an emission feature at rest-frame energy ≈6.4 keV, likely to be due to Fe K. These heavily obscured AGNs are likely to be the distant analogs of the reflection-dominated AGNs recently identified at z ≈ 0 with >10 keV observatories. On the basis of these analyses, we estimate the space density for typical (intrinsic X-ray luminosities of L 2-10 keV >~ 1043 erg s-1) heavily obscured and Compton-thick AGNs at z ≈ 2. Our space-density constraints are conservative lower limits but they are already consistent with the range of predictions from X-ray background models. 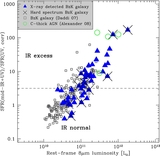