Detailed Abundances of the Solar Twins 16 Cygni A and B: Constraining Planet Formation Models

Results of a detailed abundance analysis of the solar twins 16 Cyg A and 16 Cyg B based on high-resolution, high signal-to-noise ratio echelle spectroscopy are presented. 16 Cyg B is known to host a giant planet while no planets have yet been detected around 16 Cyg A. Stellar parameters are derived directly from our high-quality spectra, and the stars are found to be physically similar, with ∆T eff = +43 K, ∆log g = -0.02 dex, and ∆ξ = +0.10 km s-1 (in the sense of A - B), consistent with previous findings. Abundances of 15 elements are derived and are found to be indistinguishable between the two stars. The abundances of each element differ by <=0.026 dex, and the mean difference is +0.003 ± 0.015 (σ) dex. Aside from Li, which has been previously shown to be depleted by a factor of at least 4.5 in 16 Cyg B relative to 16 Cyg A, the two stars appear to be chemically identical. The abundances of each star demonstrate a positive correlation with the condensation temperature of the elements (T c); the slopes of the trends are also indistinguishable. In accordance with recent suggestions, the positive slopes of the [m/H]-T c relations may imply that terrestrial planets have not formed around either 16 Cyg A or 16 Cyg B. The physical characteristics of the 16 Cyg system are discussed in terms of planet formation models, and plausible mechanisms that can account for the lack of detected planets around 16 Cyg A, the disparate Li abundances of 16 Cyg A and B, and the eccentricity of the planet 16 Cyg B b are suggested.

The data presented herein were obtained at the W. M. Keck Observatory, which is operated as a scientific partnership among the California Institute of Technology, the University of California, and the National Aeronautics and Space Administration. The Observatory was made possible by the generous financial support of the W. M. Keck Foundation. 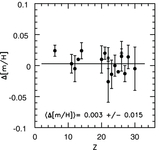