We have discovered a detached pair of white dwarfs (WDs) with a 12.75 minute orbital period and a 1315 km s-1 radial velocity amplitude. We measure the full orbital parameters of the system using its light curve, which shows ellipsoidal variations, Doppler boosting, and primary and secondary eclipses. The primary is a 0.25 M sun tidally distorted helium WD, only the second tidally distorted WD known. The unseen secondary is a 0.55 M sun carbon-oxygen WD. The two WDs will come into contact in 0.9 Myr due to loss of energy and angular momentum via gravitational wave radiation. Upon contact the systems may merge (yielding a rapidly spinning massive WD), form a stable interacting binary, or possibly explode as an underluminous Type Ia supernova. The system currently has a gravitational wave strain of 10-22, about 10,000 times larger than the Hulse-Taylor pulsar; this system would be detected by the proposed Laser Interferometer Space Antenna gravitational wave mission in the first week of operation. This system's rapid change in orbital period will provide a fundamental test of general relativity. 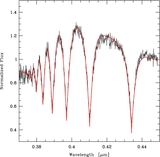