SN 1961V, one of Zwicky's defining Type V supernovae (SNe), was a peculiar transient in NGC 1058 that has variously been categorized as either a true core-collapse SN leaving a black hole (BH) or neutron star (NS) remnant, or an eruption of a luminous blue variable star. The former case is suggested by its possible association with a decaying non-thermal radio source, while the latter is suggested by its peculiar transient light curve and its low initial expansion velocities. The crucial difference is that the star survives a transient eruption but not an SN. All stars identified as possible survivors are significantly fainter, L opt ~ 105 L sun, than the L opt ~= 3 × 106 L sun progenitor star at optical wavelengths. While this can be explained by dust absorption in a shell of material ejected during the transient, the survivor must then be present as an L IR ~= 3 × 106 L sun mid-infrared source. Using archival Spitzer observations of the region, we show that such a luminous mid-IR source is not present. The brightest source of dust emission is only L IR ~= 105 L sun and does not correspond to the previously identified candidates for the surviving star. The dust cannot be made sufficiently distant and cold to avoid detection unless the ejection energy, mass, and velocity scales are those of an SN or greater. We conclude that SN 1961V was a peculiar, but real, SN. Its peculiarities are probably due to enhanced mass loss just prior to the SN, followed by the interactions of the SN blast wave with this ejecta. This adds to the evidence that there is a population of SN progenitors that have major mass-loss episodes shortly before core collapse. The progenitor is a low metallicity, ~1/3 solar, high-mass, M ZAMS >~ 80 M sun, star, which means either that BH formation can be accompanied by an SN or that surprisingly high-mass stars can form an NS. We also report on the mid-IR properties of the two other SNe in NGC 1058, SN 1969L, and SN 2007gr. 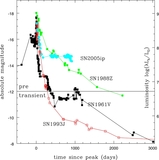