Gamma-ray bursts (GRBs) have been separated into two classes, originally along the lines of duration and spectral properties, called "short/hard" and "long/soft." The latter have been conclusively linked to the explosive deaths of massive stars, while the former are thought to result from the merger or collapse of compact objects. In recent years, indications have been accumulating that the short/hard versus long/soft division does not map directly onto what would be expected from the two classes of progenitors, leading to a new classification scheme called Type I and Type II which is based on multiple observational criteria. We use a large sample of GRB afterglow and prompt-emission data (adding further GRB afterglow observations in this work) to compare the optical afterglows (or the lack thereof) of Type I GRBs with those of Type II GRBs. In comparison to the afterglows of Type II GRBs, we find that those of Type I GRBs have a lower average luminosity and show an intrinsic spread of luminosities at least as wide. From late and deep upper limits on the optical transients, we establish limits on the maximum optical luminosity of any associated supernova (SN), confirming older works and adding new results. We use deep upper limits on Type I GRB optical afterglows to constrain the parameter space of possible mini-SN emission associated with a compact-object merger. Using the prompt-emission data, we search for correlations between the parameters of the prompt emission and the late optical afterglow luminosities. We find tentative correlations between the bolometric isotropic energy release and the optical afterglow luminosity at a fixed time after the trigger (positive), and between the host offset and the luminosity (negative), but no significant correlation between the isotropic energy release and the duration of the GRBs. We also discuss three anomalous GRBs, GRB 060505, GRB 060614, and GRB 060121, in light of their optical afterglow luminosities. 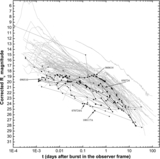