We develop a new method which measures the projected density distribution wp (rp )n of photometric galaxies surrounding a set of spectroscopically identified galaxies and simultaneously the projected cross-correlation function wp (rp ) between the two populations. In this method, we are able to divide the photometric galaxies into subsamples in luminosity intervals even when redshift information is unavailable, enabling us to measure wp (rp )n and wp (rp ) as a function of not only the luminosity of the spectroscopic galaxy, but also that of the photometric galaxy. Extensive tests show that our method can measure wp (rp ) in a statistically unbiased way. The accuracy of the measurement depends on the validity of the assumption inherent to the method that the foreground/background galaxies are randomly distributed and are thus uncorrelated with those galaxies of interest. Therefore, our method can be applied to the cases where foreground/background galaxies are distributed in large volumes, which is usually valid in real observations. We have applied our method to data from the Sloan Digital Sky Survey (SDSS) including a sample of 105 luminous red galaxies at z ~ 0.4 and a sample of about half a million galaxies at z ~ 0.1, both of which are cross-correlated with a deep photometric sample drawn from the SDSS. On large scales, the relative bias factor of galaxies measured from wp (rp ) at z ~ 0.4 depends on luminosity in a manner similar to what is found for those at z ~ 0.1, which are usually probed by autocorrelations of spectroscopic samples in previous studies. On scales smaller than a few Mpc and at both z ~ 0.4 and z ~ 0.1, the photometric galaxies of different luminosities exhibit similar density profiles around spectroscopic galaxies at fixed luminosity and redshift. This provides clear observational support for the assumption commonly adopted in halo occupation distribution models that satellite galaxies of different luminosities are distributed in a similar way, following the dark matter distribution within their host halos. 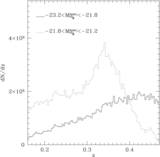