We present new results for a sample of 33 narrow-lined UV-selected active galactic nuclei (AGNs), identified in the course of a spectroscopic survey for star-forming galaxies at z ~ 2-3. The rest-frame UV composite spectrum for our AGN sample shows several emission lines characteristic of AGNs, as well as interstellar absorption features detected in star-forming Lyman break galaxies (LBGs). We report a detection of N IV] λ1486, which has been observed in high-redshift radio galaxies, as well as in rare optically selected quasars. The UV continuum slope of the composite spectrum is significantly redder than that of a sample of non-AGN UV-selected star-forming galaxies. Blueshifted Si IV absorption provides evidence for outflowing highly ionized gas in these objects at speeds of ~103 km s-1, quantitatively different from what is seen in the outflows of non-AGN LBGs. Grouping the individual AGNs by parameters such as the Lyα equivalent width, redshift, and UV continuum magnitude allows for an analysis of the major spectroscopic trends within the sample. Stronger Lyα emission is coupled with weaker low-ionization absorption, which is similar to what is seen in the non-AGN LBGs, and highlights the role that cool interstellar gas plays in the escape of Lyα photons. However, the AGN composite does not show the same trends between Lyα strength and extinction seen in the non-AGN LBGs. These results represent the first such comparison at high redshift between star-forming galaxies and similar galaxies that host AGN activity.

Based, in part, on data obtained at the W. M. Keck Observatory, which is operated as a scientific partnership among the California Institute of Technology, the University of California, and NASA, and was made possible by the generous financial support of the W. M. Keck Foundation. 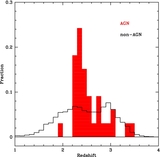