We present near-infrared (2.5-5.0 μm) spectra of shocked H2 gas in the supernova remnant IC 443, obtained with the satellite AKARI. Three shocked clumps—known as B, C, and G—and one background region were observed, and only H2 emission lines were detected. Except in clump B, the extinction-corrected level population shows the ortho-to-para ratio of ~3.0. From the level populations of clumps C and G—both the one obtained with AKARI and the one extended with previous mid-infrared observations—we found that the υ = 0 levels are more populated than the υ>0 levels at a fixed level energy, which cannot be reproduced by any combination of H2 gas in local thermodynamic equilibrium. The populations are described by the two-density power-law thermal admixture model, revised to include the collisions with H atoms. We attributed the lower (n(H2)=102.8-103.8 cm-3) and higher (n(H2)=105.4-105.8 cm-3) density gases to the shocked H2 gas behind C-type and J-type shocks, respectively, based on several arguments including the obtained high H I abundance n(H I)/n(H2) = 0.01. Under the hierarchical picture of molecular clouds, the C-type and J-type shocks likely propagate into "clumps" and "clouds" (interclump media), respectively. The power-law index b of 1.6 and 3.5, mainly determined by the lower density gas, is attributed to the shock-velocity diversity, which may be a natural result during shock-cloud interactions. According to our results, H2 υ = 1 → 0 S(1) emission is mainly from J shocks propagating into interclump media. The H2 emission was also detected at the background region, and this diffuse H2 emission may originate from the collisional process in addition to ultraviolet photon pumping. 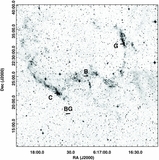