Spectroscopic Confirmation of Two Lyman Break Galaxies at Redshift Beyond 7

We report the spectroscopic confirmation of two Lyman break galaxies at redshift >7. The galaxies were observed as part of an ultra-deep spectroscopic campaign with FORS2 at the ESO/VLT for the confirmation of z ~= 7 "z-band dropout" candidates selected from our VLT/Hawk-I imaging survey. Both galaxies show a prominent emission line at 9735 Å and 9858 Å, respectively: the lines have fluxes of ~(1.6-1.2) × 10-17 erg s-1 cm-2 and exhibit a sharp decline on the blue side and a tail on the red side. The asymmetry is quantitatively comparable to the observed asymmetry in z ~ 6 Lyα lines, where absorption by neutral hydrogen in the intergalactic medium (IGM) truncates the blue side of the emission-line profile. We carefully evaluate the possibility that the galaxies are instead at lower redshift and we are observing either [O II], [O III], or Hα emission: however from the spectroscopic and the photometric data we conclude that there are no other plausible identifications, except for Lyα at redshift >7, implying that these are two of the most robust redshift determination for galaxies in the reionization epoch. Based on their redshifts and broadband photometry, we derive limits on the star formation rate and on the ultraviolet spectral slopes of the two galaxies. We argue that these two galaxies alone are unlikely to have ionized the IGM in their surroundings. 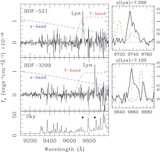