We explore the evolution of emissions by accelerated electrons in shocked shells driven by jets in active galactic nuclei. Focusing on powerful sources which host luminous quasars, we evaluated the broadband emission spectra by properly taking into account adiabatic and radiative cooling effects on the electron distribution. The synchrotron radiation and inverse Compton (IC) scattering of various photons that are mainly produced in the accretion disk and dusty torus are considered as radiation processes. We show that the resultant radiation is dominated by the IC emission for compact sources (lsim10 kpc), whereas the synchrotron radiation is more important for larger sources. We also compare shell emissions with those expected from the lobe under the assumption that the fractions of the energy deposited in the shell and lobe carried by non-thermal electrons are epsilon e ~ 0.01 and epsilon e,lobe ~ 1, respectively. We find that shell emissions are brighter than lobe ones at infrared and optical bands when the source size is gsim10 kpc, and the IC emissions from the shell at gsim10 GeV can be observed with an absence of contamination from the lobe irrespective of the source size. In particular, it is predicted that, for most powerful nearby sources (L j ~ 1047 erg s-1), ~TeV gamma-rays produced via IC emissions can be detected by modern Cherenkov telescopes such as MAGIC, HESS, and VERITAS. 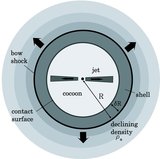