We present a new near-infrared photometric system for detection of water ice and methane ice in the solar system. The system consists of two medium-band filters in the K-band region of the near-infrared, which are sensitive to water ice and methane ice, plus continuum observations in the J band and Y band. The primary purpose of this system is to distinguish between three basic types of Kuiper Belt Objects (KBOs)—those rich in water ice, those rich in methane ice, and those with little absorbance. In this work, we present proof-of-concept observations of 51 KBOs using our filter system, 21 of which have never been observed in the near-infrared spectroscopically. We show that our custom photometric system is consistent with previous spectroscopic observations while reducing telescope observing time by a factor of ~3. We use our filters to identify Haumea collisional family members, which are thought to be collisional remnants of a much larger body and are characterized by large fractions of water ice on their surfaces. We add 2009 YE7 to the Haumea collisional family based on our water ice band observations (J - H2O = -1.03 ± 0.27) which indicate a high amount of water ice absorption, our calculated proper orbital elements, and the neutral optical colors we measured, V - R = 0.38 ± 0.04, which are all consistent with the rest of the Haumea family. We identify several objects dynamically similar to Haumea as being distinct from the Haumea family as they do not have water ice on their surfaces. In addition, we find that only the largest KBOs have methane ice, and Haumea itself has significantly less water ice absorption than the smaller Haumea family members. We find no evidence for other families in the Kuiper Belt. 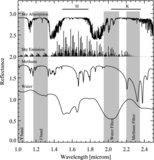