V1408 Aql (= 4U 1957+115) is a low-mass X-ray binary with an orbital period of nearly 9.3 hr, whose compact star is a black hole candidate. The system shows a large-amplitude orbital photometric modulation at optical wavelengths. We have obtained new optical photometry of V1408 Aql from which we derive the orbital light curve and an improved orbital ephemeris. We show that the orbital light curve can be reproduced by a model in which the accretion disk around the compact star is thin, axisymmetric, and uneclipsed. The secondary star is heated by X-rays from the compact star and the accretion disk. The orbital modulation is produced entirely by the changing aspect of the irradiated secondary star with orbital phase. Because the system does not eclipse, the fits of the model light curves are insensitive to the orbital parameters, allowing a wide range of orbital inclinations and mass ratios. 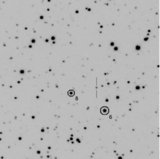