Using the Sloan Digital Sky Survey (SDSS) data release 4 (DR 4), we investigate the spatial distribution of low and high surface brightness galaxies (LSBGs and HSBGs, respectively). In particular, we focus our attention on the influence of interactions between galaxies on the star formation strength in the redshift range 0.01 < z < 0.1. With cylinder counts and projected distance to the first and fifth nearest neighbor as environment tracers, we find that LSBGs tend to have a lack of companions compared to HSBGs at small scales (<2Mpc). Regarding the interactions, we have evidence that the fraction of LSBGs with strong star formation activity increases when the distance between pairs of galaxies (rp ) is smaller than about four times the Petrosian radius (r 90) of one of the components. Our results suggest that, rather than being a condition for their formation, the isolation of LSBGs is more connected with their survival and evolution. The effect of the interaction on the star formation strength, measured by the average value of the birthrate parameter b, seems to be stronger for HSBGs than for LSBGs. The analysis of our population of LSBGs and HSBGs hosting an active galactic nucleus (AGN) show that, regardless of the mass range, the fraction of LSBGs having an AGN is lower than the corresponding fraction of HSBGs with an AGN. Also, we observe that the fraction of HSBGs and LSBGs having an AGN increases with the bulge luminosity. These results, and those concerning the star-forming properties of LSBGs as a function of the environment, fit with the scenario proposed by some authors where, below a given threshold of surface mass density, low surface brightness disks are unable to propagate instabilities, preventing the formation and evolution of massive black holes in the centers of LSBGs. 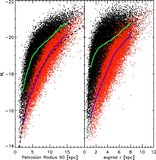