Asymmetries in the Expansion and Emission from Young Supernova Remnants

We present two-dimensional and three-dimensional numerical simulations of asymmetric young supernova remnants (SNRs) carried out with the hydrodynamical code YGUAZÚ, aiming to quantitatively assess the role of different factors that may give origin to such asymmetries in their expansion. In particular, we are interested in modeling the morphology of Tycho's SNR to address whether the companion star of a Type Ia supernova progenitor has played a role in the subsequent evolution of the remnant. With the results from the numerical simulations, we can not only study the morphology of the SNR but also compute the emission of the remnant in different spectral bands. In particular, we simulate X-ray maps, which can be directly compared to recent and previous observations of Tycho's SNR. Our results suggest that the most likely explanation for Tycho's morphology is that after the supernova (SN) explosion the shock front stripped the envelope of its companion. We represent this effect by adding a conical region with an enhanced density into the initial sphere immediately after the explosion. Assuming that Tycho's companion was a massive red giant star, we explore different values of the angle of aperture and mass excess of the conical region. A good agreement with observational data was found for the model with a mass excess of 0.3 M sun and an aperture of 90°. After the collision with the SN shock wave, the companion would become an He-rich star. This scenario would gain observational support if a star with these characteristics is found in the vicinity of the center of the SN explosion. 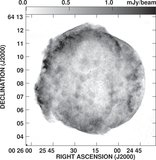