The size distribution in the cold classical Kuiper Belt (KB) can be approximated by two idealized power laws: one with steep slope for radii R > R* and one with shallow slope for R < R*, where R* ~ 25-50 km. Previous works suggested that the size frequency distribution (SFD) rollover at R* can be the result of extensive collisional grinding in the KB that led to the catastrophic disruption of most bodies with R < R*. Here, we use a new code to test the effect of collisions in the KB. We find that the observed rollover could indeed be explained by collisional grinding provided that the initial mass in large bodies was much larger than the one in the present KB and was dynamically depleted. In addition to the size distribution changes, our code also tracks the effects of collisions on binary systems. We find that it is generally easier to dissolve wide binary systems, such as the ones existing in the cold KB today, than to catastrophically disrupt objects with R ~ R*. Thus, the binary survival sets important limits on the extent of collisional grinding in the KB. We find that the extensive collisional grinding required to produce the SFD rollover at R* would imply a strong gradient of the binary fraction with R and separation, because it is generally easier to dissolve binaries with small components and/or those with wide orbits. The expected binary fraction for R <~ R* is lsim0.1. The present observational data do not show such a gradient. Instead, they suggest a large binary fraction of ~0.4 for R = 30-40 km. This may indicate that the rollover was not produced by disruptive collisions, but is instead a fossil remnant of the KB object formation process. 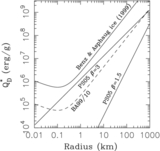