We present results from the PARallaxes of Southern Extremely Cool objects (PARSEC) program, an observational program begun in 2007 April to determine parallaxes for 122 L and 28 T southern hemisphere dwarfs using the Wide Field Imager on the ESO 2.2 m telescope. The results presented here include parallaxes of 10 targets from observations over 18 months and a first version proper motion catalog. The proper motions were obtained by combining PARSEC observations astrometrically reduced with respect to the Second US Naval Observatory CCD Astrograph Catalog, and the Two Micron All Sky Survey Point Source Catalog. The resulting median proper motion precision is 5 mas yr-1 for 195,700 sources. The 140 0.3 deg2 fields sample the southern hemisphere in an unbiased fashion with the exception of the galactic plane due to the small number of targets in that region. The proper motion distributions are shown to be statistically well behaved. External comparisons are also fully consistent. We will continue to update this catalog until the end of the program, and we plan to improve it including also observations from the GSC2.3 database. We present preliminary parallaxes with a 4.2 mas median precision for 10 brown dwarfs, two of which are within 10 pc. These increase the present number of L dwarfs by 20% with published parallaxes. Of the 10 targets, seven have been previously discussed in the literature: two were thought to be binary, but the PARSEC observations show them to be single; one has been confirmed as a binary companion and another has been found to be part of a binary system, both of which will make good benchmark systems. These results confirm that the foreseen precision of PARSEC can be achieved and that the large field of view will allow us to identify wide binary systems. Observations for the PARSEC program will end in early 2011 providing three to four years of coverage for all targets. The main expected outputs are: more than a 100% increase in the number of L dwarfs with parallaxes, increment in the number of objects per spectral subclass up to L9—in conjunction with published results—to at least 10, and to put sensible limits on the general binary fraction of brown dwarfs. We aim to contribute significantly to the understanding of the faint end of the H-R diagram and of the L/T transition region. 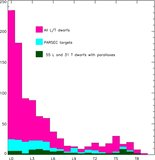