Context. Harvesting the SAI supernova catalog, the most complete list of supernovae (SNe) currently available, we search for SNe that apparently do not occur within a distinct host galaxy but lie a great distance (several arcmin) apart from the host galaxy given in the catalog or even show no sign of an identifiable galaxy in their direct vicinity.
Aims: We attempt to distinguish between two possible explanations of this host-lessness of a fraction of reported SNe, namely (i) that a host galaxy is too faint (of too low surface brightness) to be detected within the limits of currently available surveys (presumably a low surface brightness galaxy) or (ii) the progenitor of the SN is a hypervelocity star (HVS) that exploded kiloparsecs away from its host galaxy.
Methods: We use deep imaging to test the first explanation. If no galaxy is identified within our detection limit of ~27 mag arcsec-2, which is the central surface brightness of the faintest known LSB galaxy so far, we discard this explanation and propose that the SN, after several other checks, had a hypervelocity star progenitor. We focus on observations for which this is the case and give lower limits to the actual space velocities of the progenitors, making them the first hypervelocity stars known in galaxies other than our own Milky Way.
Results: Analyzing a selected subsample of five host-less SNe, we find one, SN 2006bx in UGC 5434, is a possible hypervelocity progenitor category with a high probability, exhibiting a projected velocity of ~800 km s-1. SN 1969L in NGC 1058 is most likely an example of a very extended star-forming disk visible only in the far-UV, but not in the optical wavebands. Therefore, this SN is clearly due to in situ star formation. This mechanism may also apply to two other SNe that we investigated (SN 1970L and SN 1997C), but this cannot be determined with certainty. Another SN, SN 2005 nc which is associated with a gamma-ray burst (GRB 050525), is a special case that is not covered by our initial assumptions. Even with deep Hubble Space Telescope data, a host galaxy cannot be unambiguously identified. 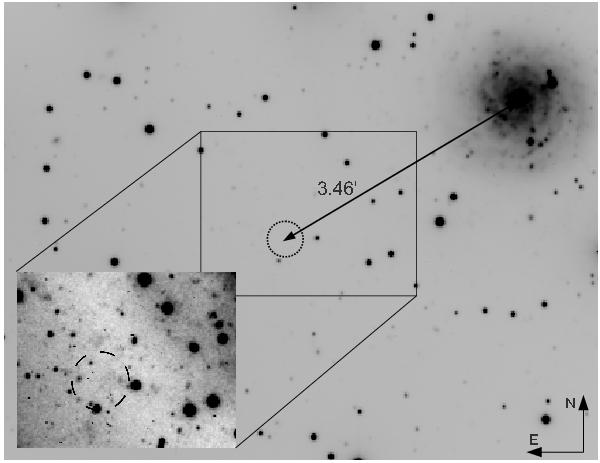