Molecular gas in the inner 0.7 kpc-radius ring of M 31

The study of the gas kinematic in the central 1.5 kpc × 1.5 kpc region of M 31 has revealed several surprises. The starting point of this investigation was the detection at the IRAM-30 m telescope of molecular gas with very large line splittings up to 260 km s-1 within the beam (~40 pc). In this region, which is known for its low gas content, we also detect an ionised gas outflow in the circumnuclear region (within 75 pc from the centre) extending to the whole area in X-ray. Relying on atomic, ionised, and molecular gas, we account for most observables with a scenario that assumes that a few hundreds Myr ago, M 31 underwent a frontal collision with M 32, which triggered some star-formation activity in the centre, and this collision explains the special configuration of M 31 with two rings observed at 0.7 kpc and 10 kpc. The inner disc (whose rotation is detected in HI and ionised gas ([NII])) has thus been tilted (inclination: 43 deg, PA: 70 deg) with respect to the main disc (inclination: 77 deg, PA: 35 deg). One of the CO velocity components is compatible with this inner disc, while the second one comes from a tilted ring-like material with 40 deg inclination and PA = -35 deg. The relic star formation estimatedby previous works to have occurred more than 100 Myr ago could have been triggered by the collisionand could be linked to the outflow detected in the ionised gas. Last, we demonstrate that the amplitude of the line splittings detected in CO centred on the systemic velocity with a relatively high spatial resolution (40 pc) cannot be accounted for by a possible weak bar that is roughly aligned along the minor axis. Although M 31 has a triaxial bulge, there are no bar indicators in the gas component (photometry, no strong skewness of the isovelocities, etc.). 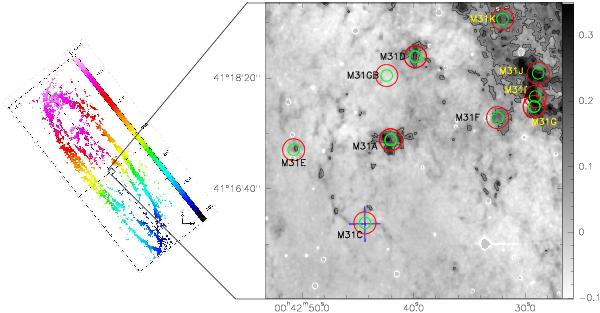