Context. The tidal evolution of planets orbiting brown dwarfs (BDs) presents an interesting case study because BDs' terrestrial planet forming region is located extremely close-in. In fact, the habitable zones of BDs range from roughly 0.001 to 0.03 AU and for the lowest-mass BDs are located interior to the Roche limit.
Aims: In contrast with stars, BDs spin up as they age. Thus, the corotation distance moves inward. This has important implications for the tidal evolution of planets around BDs.
Methods: We used a standard equilibrium tidal model to compute the orbital evolution of a large ensemble of planet-BD systems. We tested the effect of numerous parameters such as the initial semi-major axis and eccentricity, the rotation period of the BD, the masses of both the BD and planet, and the tidal dissipation factors.
Results: We find that all planets that form at or beyond the corotation distance and with initial eccentricities smaller than ~0.1 are repelled from the BD. Some planets initially interior to corotation can survive if their inward tidal evolution is slower than the BD's spin evolution, but most initially close-in planets fall onto the BD.
Conclusions: We find that the most important parameter for the tidal evolution is the initial orbital distance with respect to the corotation distance. Some planets can survive in the habitable zone for Gyr timescales, although in many cases the habitable zone moves inward past the planet's orbit in just tens to hundreds of Myr. Surviving planets can have orbital periods of less than 10 days (as small as 10 h), so they could be observable by transit. 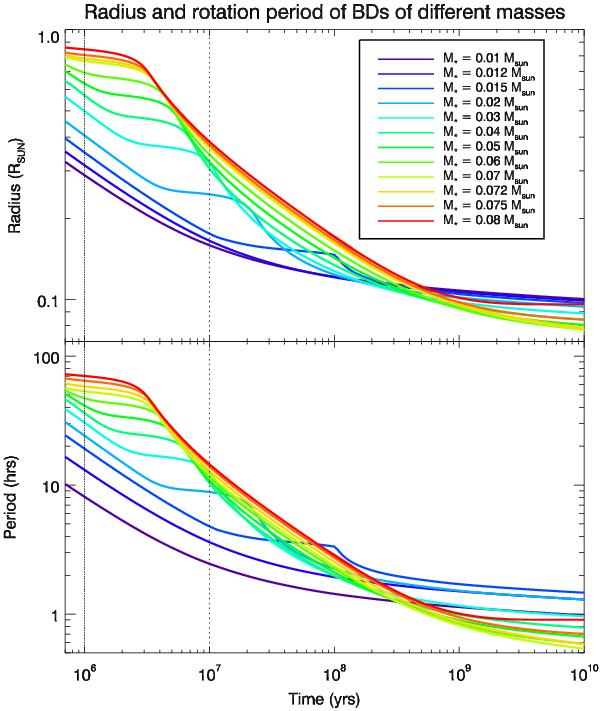