Context. Interferometers provide accurate diameter measurements of stars by analyzing both the continuum and the lines formed in photospheres and chromospheres. Tests of the geometrical extent of the chromospheres are therefore possible by comparing the estimated radius in the continuum of the photosphere and the estimated radii in chromospheric lines.
Aims: We aim to constrain the geometrical extent of the chromosphere of non-binary K giant stars and detect any spatial structures in the chromosphere.
Methods: We performed observations with the CHARA interferometer and the VEGA beam combiner at optical wavelengths. We observed seven non-binary K giant stars (β and η Cet, δ Crt, ρ Boo, β Oph, 109 Her, and ι Cep). We measured the ratio of the radii of the photosphere to the chromosphere using the interferometric measurements in the Hα and the Ca II infrared triplet line cores. For β Cet, spectro-interferometric observations are compared to a non-local thermal equilibrium (NLTE) semi-empirical model atmosphere including a chromosphere. The NLTE computations provide line intensities and contribution functions that indicate the relative locations where the line cores are formed and can constrain the size of the limb-darkened disk of the stars with chromospheres. We measured the angular diameter of seven K giant stars and deduced their fundamental parameters: effective temperatures, radii, luminosities, and masses. We determined the geometrical extent of the chromosphere for four giant stars (β and η Cet, δ Crt and ρ Boo).
Results: The chromosphere extents obtained range between 16% to 47% of the stellar radius. The NLTE computations confirm that the Ca II/849 nm line core is deeper in the chromosphere of β Cet than either of the Ca II/854 nm and Ca II/866 nm line cores. We present a modified version of a semi-empirical model atmosphere derived by fitting the Ca II triplet line cores of this star. In four of our targets, we also detect the signature of a differential signal showing the presence of asymmetries in the chromospheres.
Conclusions: It is the first time that geometrical extents and structure in the chromospheres of non-binary K giant stars are determined by interferometry. These observations provide strong constrains on stellar atmosphere models. 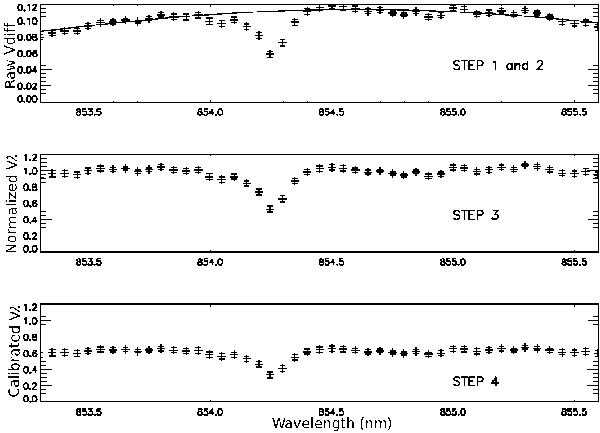