The Eddington factor as the key to understand the winds of the most massive stars. Evidence for a Γ-dependence of Wolf-Rayet type mass loss

Context. The most massive stars are thought to be hydrogen-rich Wolf-Rayet stars of late spectral subtype (in the following WNh stars). The emission-line spectra of these stars are indicative of strong mass loss. In previous theoretical studies this enhanced mass loss has been attributed to their proximity to the Eddington limit.
Aims: We investigate observed trends in the mass-loss properties of such young, very massive stars to examine a potential Γ-dependence, i.e., with respect to the classical Eddington factor Γe. Based on different mass estimates, we gain information about the evolutionary status of these objects.
Methods: We derive theoretical mass-luminosity relations for very massive stars, based on a large grid of stellar structure models. Using these relations, we estimate Eddington factors (Γe) for a sample of stars, under different assumptions of their evolutionary status. We evaluate the resulting mass-loss relations, and compare them with theoretical predictions.
Results: We find observational evidence that the mass loss in the WR regime is dominated by the Eddington parameter Γe, which has important consequences for the way we understand Wolf-Rayet stars and their mass loss. In addition, we derive wind masses that support the picture that the WNh stars in young stellar clusters are very massive, hydrogen-burning stars.
Conclusions: Our findings suggest that the proximity to the Eddington limit is the physical reason for the onset of Wolf-Rayet type mass loss. This means that, e.g. in stellar evolution models, the Wolf-Rayet stage should be identified by large Eddington parameters, instead of a helium-enriched surface composition. The latter is most likely only a consequence of strong mass loss, in combination with internal mixing. For very massive stars, the enhanced Γ-dependent mass loss is responsible for the formation of late WNh subtypes with high hydrogen surface abundances, partly close to solar. Because mass loss dominates the evolution of very massive stars, we expect a strong impact of this effect on their end products, in particular on the potential formation of black holes, and gamma-ray bursts, as well as the observed upper mass limit of stars. 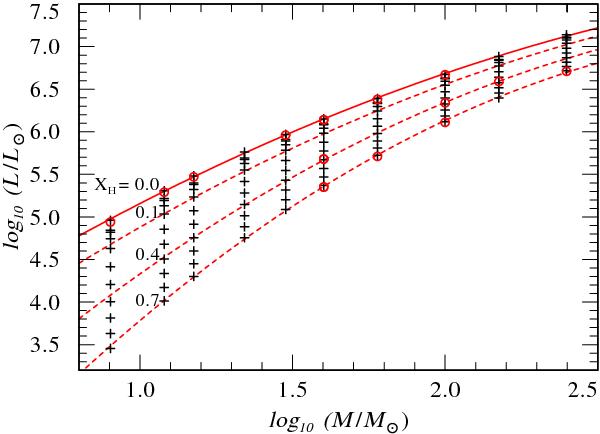