The Kepler characterization of the variability among A- and F-type stars. I. General overview

Context. The Kepler spacecraft is providing time series of photometric data with micromagnitude precision for hundreds of A-F type stars.
Aims: We present a first general characterization of the pulsational behaviour of A-F type stars as observed in the Kepler light curves of a sample of 750 candidate A-F type stars, and observationally investigate the relation between γ Doradus (γ Dor), δ Scuti (δ Sct), and hybrid stars.
Methods: We compile a database of physical parameters for the sample stars from the literature and new ground-based observations. We analyse the Kepler light curve of each star and extract the pulsational frequencies using different frequency analysis methods. We construct two new observables, "energy" and "efficiency", related to the driving energy of the pulsation mode and the convective efficiency of the outer convective zone, respectively.
Results: We propose three main groups to describe the observed variety in pulsating A-F type stars: γ Dor, δ Sct, and hybrid stars. We assign 63% of our sample to one of the three groups, and identify the remaining part as rotationally modulated/active stars, binaries, stars of different spectral type, or stars that show no clear periodic variability. 23% of the stars (171 stars) are hybrid stars, which is a much higher fraction than what has been observed before. We characterize for the first time a large number of A-F type stars (475 stars) in terms of number of detected frequencies, frequency range, and typical pulsation amplitudes. The majority of hybrid stars show frequencies with all kinds of periodicities within the γ Dor and δ Sct range, also between 5 and 10 d-1, which is a challenge for the current models. We find indications for the existence of δ Sct and γ Dor stars beyond the edges of the current observational instability strips. The hybrid stars occupy the entire region within the δ Sct and γ Dor instability strips and beyond. Non-variable stars seem to exist within the instability strips. The location of γ Dor and δ Sct classes in the (Teff, log g)-diagram has been extended. We investigate two newly constructed variables, "efficiency" and "energy", as a means to explore the relation between γ Dor and δ Sct stars.
Conclusions: Our results suggest a revision of the current observational instability strips of δ Sct and γ Dor stars and imply an investigation of pulsation mechanisms to supplement the κ mechanism and convective blocking effect to drive hybrid pulsations. Accurate physical parameters for all stars are needed to confirm these findings. 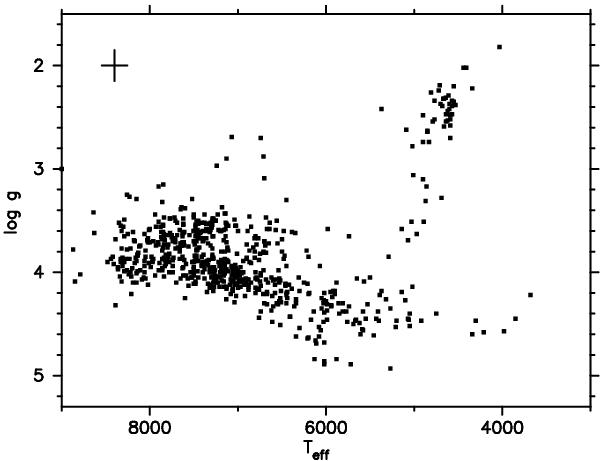