The HARPS search for Earth-like planets in the habitable zone. I. Very low-mass planets around , , and

Context. In 2009 we started an intense radial-velocity monitoring of a few nearby, slowly-rotating and quiet solar-type stars within the dedicated HARPS-Upgrade GTO program.
Aims: The goal of this campaign is to gather very-precise radial-velocity data with high cadence and continuity to detect tiny signatures of very-low-mass stars that are potentially present in the habitable zone of their parent stars.
Methods: Ten stars were selected among the most stable stars of the original HARPS high-precision program that are uniformly spread in hour angle, such that three to four of them are observable at any time of the year. For each star we recorded 50 data points spread over the observing season. The data points consist of three nightly observations with a total integration time of 10 min each and are separated by two hours. This is an observational strategy adopted to minimize stellar pulsation and granulation noise.
Results: We present the first results of this ambitious program. The radial-velocity data and the orbital parameters of five new and one confirmed low-mass planets around the stars , , and are reported and discussed, among which is a system of three super-Earths and one that harbors a 3.6 M⊕-planet at the inner edge of the habitable zone.
Conclusions: This result already confirms previous indications that low-mass planets seem to be very frequent around solar-type stars and that this may occur with a frequency higher than 30%. 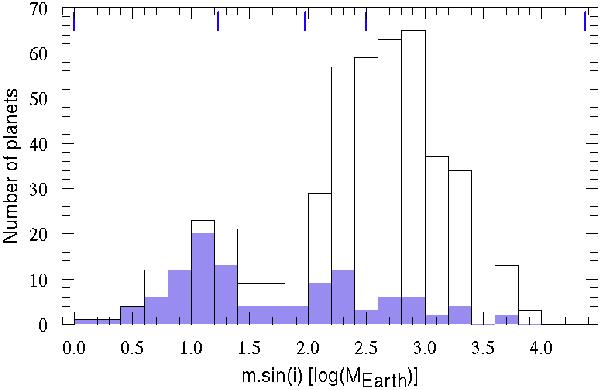