Detection of a weak surface magnetic field on Sirius A: are all tepid stars magnetic?


Aims: We aim at a highly sensitive search for weak magnetic fields in main sequence stars of intermediate mass, by scanning classes of stars with no previously reported magnetic members. After detecting a weak magnetic field on the normal, rapidly rotating A-type star Vega, we concentrate here on the bright star Sirius A, taken as a prototypical, chemically peculiar, moderately rotating Am star.
Methods: We employed the NARVAL and ESPaDOnS high-resolution spectropolarimeters to collect 442 circularly polarized spectra, complemented by 60 linearly polarized spectra. Using a list of about 1100 photospheric spectral lines, we computed a cross correlation line profile from every spectrum, leading to a signal-to-noise ratio of up to 30 000 in the polarized profile.
Results: We report the repeated detection of circularly polarized, highly asymmetric signatures in the line profiles, interpreted as Zeeman signatures of a large-scale photospheric magnetic field, with a line-of-sight component equal to 0.2 ± 0.1 G.
Conclusions: This is the first polarimetric detection of a surface magnetic field on an Am star. Using rough estimates of the physical properties of the upper layers of Sirius A, we suggest that a dynamo operating in the shallow convective envelope cannot account for the field strength reported here. Together with the magnetic field of Vega, this result confirms that a new class of magnetic objects exists among non Ap/Bp intermediate-mass stars, and it may indicate that a significant fraction of tepid stars are magnetic. 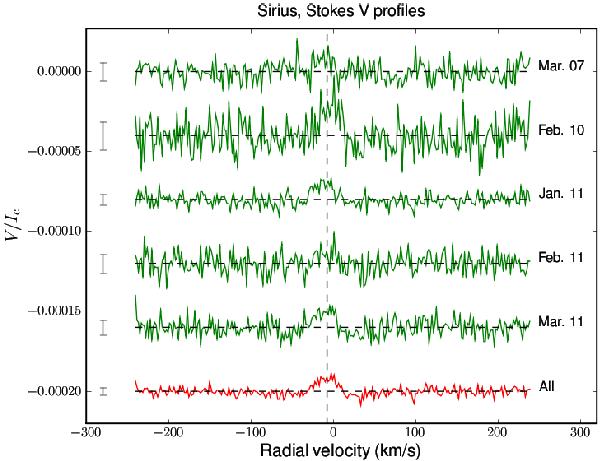