Context. The oxygen and nitrogen-to-oxygen abundances relation is characterized by a plateau around log(N/O) = -1.6 at metallicities lower than 12+log(O/H) ~ 8.25. However, there is a subset of blue compact dwarf galaxies (BCDs) with unexpectedly high N/O values.
Aims: We want to study the spatial distribution of the physical properties and of oxygen and nitrogen abundances in three BCDs (HS 0128+2832, HS 0837+4717, and Mrk 930) with a reported excess of N/O in order to investigate the nature of this excess and, particularly, its association with Wolf-Rayet (WR) stars.
Methods: We observed these BCDs by using PMAS integral field spectroscopy in the optical spectral range (3700-6900 Å) and mapping the brightest emission lines, hence their interstellar medium (ISM) physical-chemical properties (reddening, excitation, electron density and temperature, and O and N chemical abundances), using both the direct method and appropriate strong-line methods. We made a statistical analysis of the resulting distributions and compared them with the integrated properties of the galaxies.
Results: Outer parts of the three galaxies are placed in the "AGN-zone" of the [Nii]/Hα vs. [Oiii]/Hβ diagnostic diagram most likely due to a high N/O combined with the excitation structure in these regions. From the statistical analysis, it is assumed that a certain property can be considered as spatially homogeneous (or uniform) if a normal Gaussian function fits its distribution in several regions of the galaxy. Moreover, a disagreement between the integrated properties and the mean values of the distribution usually appears when a Gaussian does not fit the corresponding distribution. We find that 1) for HS 0128+2832, only the N/O ratio as derived from the direct method is uniform; 2) for HS 0837+4717, all properties are uniform; and 3) for Mrk 930, the uniformity is found for all parameters, except for electron density and reddening. The rotation curve, the Hα map, and UV images reveal a perturbed morphology and possible interacting processes in Mrk 930. Finally, if the N/O is constant on spatial scales of several kpc, as our analysis indicates, we conclude that there are not enough WR stars estimated from spectroscopy to pollute the ISM and to produce the observed N/O excess in these objects. 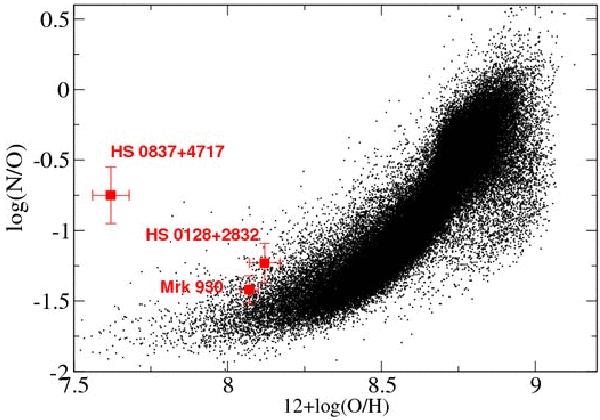