X-ray spectral properties of Seyfert galaxies and the unification scheme

Context. The unification scheme of Seyfert galaxies predicts that the observed differences between types 1 and 2 Seyfert galaxies are solely due to the differing orientations of the toroidal-shaped obscuring material around AGN. The observed X-ray spectra of Seyfert type 2s compared to type 1s are expected to be affected by higher absorbing column density owing to the edge-on view of the obscuring torus.
Aims: We study the 0.5-10 keV X-ray spectral properties of Seyfert type 1s and type 2s with the aim of testing the predictions of Seyfert unification scheme in the X-ray regime.
Methods: We use an optically selected Seyfert sample in which type 1s and type 2s have matched distributions in parameters that are independent of the orientation of AGN and the host galaxy.
Results: The 0.5-10 keV XMM-Newton pn X-ray spectra of Seyfert galaxies are in general best fitted with a model that consists of (i) an absorbed powerlaw; (ii) a narrow Gaussian fitted to the Fe Kα emission line; and (iii) an often seen soft-excess component characterized by either a thermal plasma model with temperature kT ~ 0.1-1.0 keV or a steep powerlaw or both. The 2.0-10 keV hard X-ray continuum emission in several Seyfert type 2s is dominated by reflection and suggests the Compton-thick obscuration. Results of the statistical comparison between the distributions of (i) the observed X-ray luminosities in the soft (0.5-2.0 keV) and hard (2.0-10.0 keV) bands; (ii) the X-ray absorbing column densities; (iii) the equivalent widths of Fe Kα line; and (iv) the flux ratios of hard X-ray to [OIII] λ5007 Å , for the two Seyfert subtypes are consistent with the obscuration and orientation-based unification scheme. 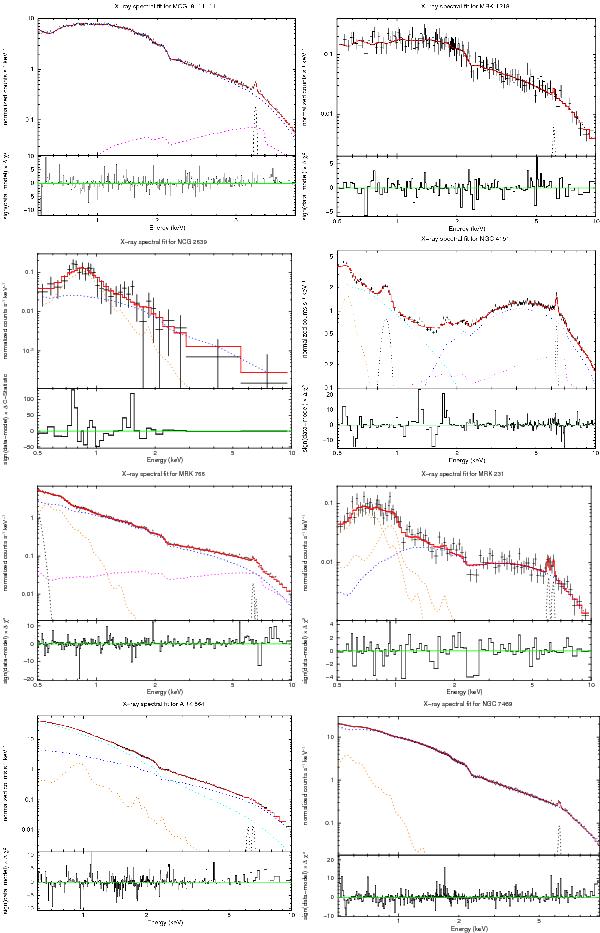