Context. Outflows from asymptotic giant branch (AGB) and red supergiant (RSG) stars inject dust into the interstellar medium. The total rate of dust return provides an important constraint to galactic chemical evolution models. However, this requires detailed radiative transfer (RT) modeling of individual stars, which becomes impractical for large data sets. An alternative approach is to select the best-fit spectral energy distribution (SED) from a grid of dust shell models, allowing for a faster determination of the luminosities and mass-loss rates for entire samples.
Aims: We have developed the Grid of RSG and AGB ModelS (GRAMS) to measure the mass-loss return from evolved stars. The models span the range of stellar, dust shell and grain properties relevant to evolved stars. The GRAMS model database will be made available to the scientific community. In this paper we present the carbon-rich AGB model grid and compare our results with photometry and spectra of Large Magellanic Cloud (LMC) carbon stars from the SAGE (Surveying the Agents of Galaxy Evolution) and SAGE-Spec programs.
Methods: We generate models for spherically symmetric dust shells using the 2Dust code, with hydrostatic models for the central stars. The model photospheres have effective temperatures between 2600 and 4000 K and luminosities from ~2000 L⊙ to ~40 000 L⊙. Assuming a constant expansion velocity, we explore five values of the inner radius Rin of the dust shell (1.5, 3, 4.5, 7 and 12 Rstar). We fix the outer radius at 1000 Rin. Based on the results from our previous study, we use amorphous carbon dust mixed with 10% silicon carbide by mass. The grain size distribution follows a power-law and an exponential falloff at large sizes. The models span twenty-six values of 11.3 μm optical depth, ranging from 0.001 to 4. For each model, 2Dust calculates the output SED from 0.2 to 200 μm.
Results: Over 12 000 models have dust temperatures below 1800 K. For these, we derive synthetic photometry in optical, near-infrared and mid-infrared filters for comparison with available data. We find good agreement with magnitudes and colors observed for LMC carbon-rich and extreme AGB star candidates from the SAGE survey, as well as spectroscopically confirmed carbon stars from the SAGE-Spec study. Our models reproduce the IRAC colors of most of the extreme AGB star candidates, consistent with the expectation that a majority of these enshrouded stars have carbon-rich dust. Finally, we fit the SEDs of some well-studied carbon stars and compare the resulting luminosities and mass-loss rates with those from previous studies. 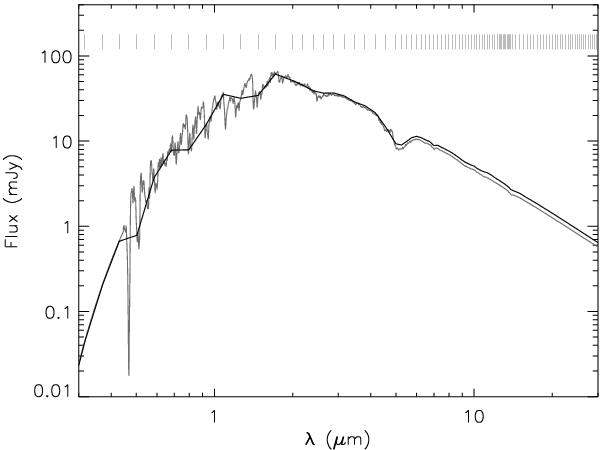